Investigation of plasma leptinlevel in patients with type 2 diabetes mellitus

INVESTIGATION OF PLASMA LEPTINLEVER IN PATIENTS WITH

Type 2 diabetes mellitus (T2DM) is achronic metabolic disorder withan exponential increase in developing countries.Theinternational diabetes federation (IDF) reported 382 million diabetes cases in 2013 with a prediction of 592 million cases by 2035, and 80% of these casesare in developing countries [1]. In Vietnam, the number of patients with T2DMis growingwith an estimated 3.3 million diabetes cases reported for 2014. The prevalence of diabetes in the age group of 30-69 yearsis estimated to be 5.7% across Vietnam and 7% in urban areas[2].

T2DMconstitutes up to 95% ofall diabetes and is characterized by chronic hyperglycaemia resulting from defects in insulin secretion and/or insulin action and metabolic disorders of protein and lipids [3]. The pathogenesis of T2DM consists of two major abnormalities including insulin resistance and dysfunction of insulin production,which lead to the disability to regulate blood glucose level [4]. The damage of pancreatic β cells to produce sufficient insulin andadiponectin as well as an increased production of pro-inflammatory cytokines due to obesity are the major contributing factors for T2DM [3]. Insulin resistance appeared years before the clinical manifestation of T2DM and is significantly associated with obesity, especially with abdominal and visceral obesity with an abnormally increased waist-to-hip ratio (WHR), dyslipidemia, hypertension and other metabolic disorders.Therefore, obesity largely contributes to insulin resistance in patients with T2DM[5].

Adipose tissueis recently recognized as an organ for metabolism of sexual steroids and production of adipsin that significantly contributes to loss of body weight [6]. Adipose tissue-derived proteins regulatemetabolic functionalities including hormone activities [7].Adipose tissueis also known as an endocrine organ that can produce various peptides with bioactivities namely adipokines. Increased adipose tissue due to obesity, especially deposition of visceral fat, is associated with insulin resistance, increased blood glucose levels, lipid metabolic disorders, hypertension and inflammation [7]. The adipose tissue-derived hormones such as adiponectin, leptin, adipsin, and resistin have been shown to be associated with metabolic disorders and are risk factors for T2DM and cardiovascular diseases. This study aims to investigate the levels of leptin andtheir correlations with insulin resistance ofoverweight/obese andT2DM.

One hundred thirty (n=130) patients with T2DMand one hundred twenty five (n=125) control individuals were included in the study. The patients were classified into two subgroups based on their BMI and T2DM status. The first subgroupincludes the patients with both overweight/obese (BMI³23) and T2DM (patients with overweight T2DM, n=57). The second subgroup includes patients with T2DM butwithout overweight (BMI<23)(non-overweight T2DM, n=73).The patients were diagnosed for T2DMbased on the standard criteria reported byworld health organization (WHO)in 1998 and byInternational Diabetes Federation (IDF) in 2005.The anthropometric indicators such as height, weight, waist and hip circumferencewere measured for all study participants.Body mass index (BMI) and waist-hip ratio (WHR) were calculated based on their anthropometric indicators(Table 1).

Clinical and demographic data were presented in median values with range for continuous variables.The student’s t-tests or one-way ANOVA were used for comparing mean of two or more groups, respectively. Chi-square or Fisher’s exact tests were used to compare categorical variables. Kruskal-Wallis or Mann-Whitney U test was used to analyze the plasma levels of leptininthe patients withT2DM and in controls wherever appropriate. All statistical analyses were performed using IBM Statistics SPSS v.19 (IBM Corp, Armonk, NY. the USA),and the level of significance was set at a P value of less than 0.05.

1.Demographic, clinical and biochemical characteristics of the study subjects

Table 1: Characteristics of patients with type 2 diabetes mellitus and controls 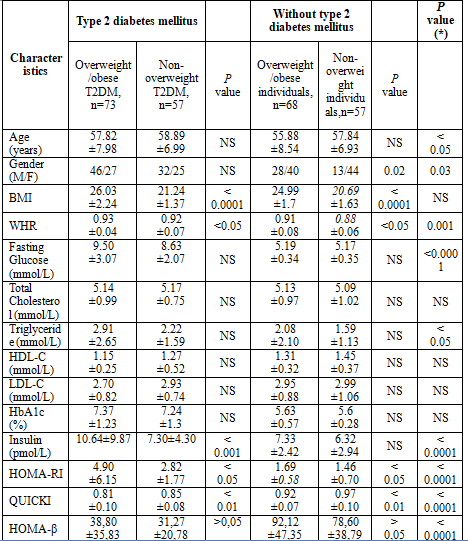 2. Leptin levels in patients with type 2 diabetes mellitus and in controls 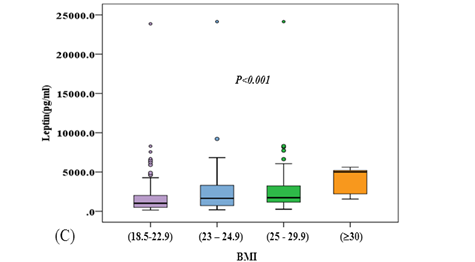 Figure 2: Leptin level in male and female patients with T2DM, in the T2DM patients with and without matabolic syndrome (MS) and in overweight/obese levels of subjects.

Leptin, a hormone secreted by adipocytes in quantities which mainly reflect fat mass and serves as an important signal of body energy stores. Leptin deficiency in mice and/or in humans is associat­ed with neuroendocrine and metabolic abnormalities, including insulin resistance and diabetes. All these ab­normalities are corrected by exogenous leptin administration, suggesting that leptin plays a role in glucose homeo­stasis and possibly in the pathogenesis of other obesity-related metabolic complications [4].

Previous studies have shown that plasma leptin levels are closely associated with adiposity [8], and its level correlated with increased MS components [9]. Plasma leptin level in diabetes is rather controversial; one recent study does not observe any significant difference between diabetic and non-diabetic subjects, others reported significant lower level in type 1 diabetic subjects and type 2 diabetics with similar adiposity [10].In line with other studies, our results revealed that leptin levels were significantly increased in OV/Opatients with T2DM and in OV/O healthy individuals compared to patients with WOV/O T2DM and healthy individuals, respectively (Figure 1). In addition, our investigations revealed that leptin levels were increased female T2DM patients and in T2MS patients with MS. The increasing leptin levels were association to BMI of subjects (Figure 2). These results indicate that increased leptin may potentially respondedto the development of overweight/obese and T2DM and metabolic disorders.

Recently studies shown that low leptin levels were also associated with the pathogenesis of many other diseases such as lipid metabolic disorders and obesity. Theleptin level was significant correlated to T2DM clinical parameters including insulin (r=0.23, p<0.05) and HOMA-β (r=0.216, p<0.05) and inversity correlated to QUICKI (r=- 0.366, p<0.0001).However, our data show that theleptin levels are not correlated with numerous clinical parameters such as triglycerides, cholesterol, HDL-C and LDL-C (data not shown). Those observations indicate that adiponectin levels involve in the development of T2DM.Therefore, based on the levels of leptin an adipose-derive cytokine could be useful for diagnosis of insulin resistance. However, more studies are required to propose a new index and verify the diagnostic accuracy in clinical practice and to establish a cut-off value and reference range of insulin sensitivity for specific populations [11].

We thank all the study subjects for their participation. This research is funded by Vietnam National Foundation for Science and Technology Development (NAFOSTED) under grant number106-YS.02-2014.36. 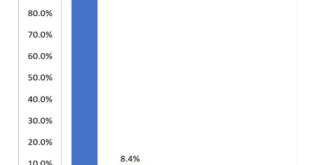 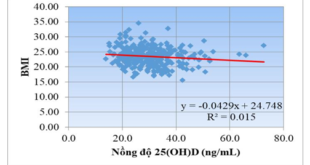 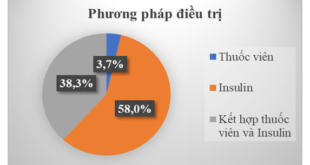 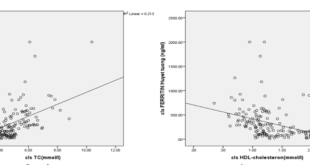