Background: Vietnam’s  salt iodine supplementation program is a Government funded activity. Since 2005, the reduction of the funding source has had a direct impact on the effort to reduce iodine deficiency disorders nationwide, including Vinh Phuc. Objectives: Assessing the current situation of using salt and iodine-containing products of people in Vinh Phuc province. Determining the impact of iodine deficiency on the high risk subjects. Methods: The study applied the Descriptive Epidemiology method – Cross-sectional investigation to evaluate the current situation of iodized salt use and the effect of iodine deficiency on the at-risk subjects. The study was conducted in 2017 on 540 households, 108 women of reproductive age from 18-49 years old and 720 primary school students in 36 communes of Vinh Phuc province. Results: The results showed that 98.1% of the households use fish sauce, 11.9% use salt, 93.9% use used any type of seasoning powder, and 72,4% used iodized seasoning powder. 540 samples of salt and seasoning powder were taken for testing and all samples (100%) did not contain sufficient iodine content to meet disease prevention standards. The goitre rate in primary school students is 2.5%, mainly at level 1A (94.4%). There was no relationship between gender and goitre rate in students (p = 0.6). In women, there was no relationship between occupational status and iodine salt use (p = 0.453) and use of iodized seasoning powder (p = 0. 57). There was no correlation between literacy and iodized salt and iodized powder use (p = 0.3 and p = 0.7). Conclusion: Iodine supplementation in salt, fish sauce and spices is one of the effective measures in iodine deficiency disorders prevention. The study proposes to strengthen inspection and implement strict sanction the production of iodine products that do not meet the quality standards to ensure the quality of products that reach consumers.

Vietnam is a country in an iodine-deficient region with 94% of the population living in iodine-deficient areas. Since 1994, Vietnam has educated the entire population to use iodized salt for disease prevention and has achieved great successes in iodine deficiency disorders prevention activities. In 2005, Vietnam eliminated the iodine deficiency according to three criteria: coverage of iodized salt meeting disease prevention standards > 90%; the rate of goitre in children aged 8-12 years <5% and median urinary iodine level ≥ 10 mcg / dl [1].

However, after 2005, the program of adding iodine to salt was no longer funded by the Government. Budget shortages and changes in management structure have resulted in a significant decrease in iodized salt coverage and urinary iodine concentrations, to the point that the iodine deficiency disorders have once again become prevalent medical problems in the community. According to the report of the Central Endocrinology Hospital in 2011, the rate of iodized in Vietnam was 45.1%, the median urinary iodine level dropped to mild deficiency (only 8.3 mcg / dl in 2010) [ 2], by 2015, the iodized salt coverage in the Red River Delta was only 38.5% [3].

Similar to other provinces, the program on prevention of iodine deficiency disorders in Vinh Phuc has been significantly reduced since 2015, and prevention activities cannot be carried out regularly due to lack of funding. The proportion of households using iodized salt has been decreasing over the years. In 2005, the percentage of households using iodized salt in the province was 95.7%, in 2013 it dropped to 70%; in 2015 it was only 65.8%. The median urinary iodine level in women of reproductive age decreased significantly, in 2005 was 32.51 mcg / dl, in 2010: 8.5 mcg / dl, in 2016: 6.5 mcg / dl. The rate of goitre students from 2010 to present has not been evaluated. This has the risk of seriously affecting the results of eliminating iodine deficiency disorders, the danger of iodine deficiency is imminent.

So we conduct research on the topic: “Current situation of salt use, iodine- containing preparations and effects of iodine deficiency on at-risk subjects in Vinh Phuc province”, aiming at:

2. SUBJECTS AND METHODS OF THE STUDY

* Calculating the number of women 18 – 49 years old to be surveyed:

+ p is the estimated percentage of iodized salt using in the whole province which is 60%;

+ ∆ is he desired difference between the rate obtained from the sample (p) and the proportion of the population (P), taken is 0,042.

* Calculating the number of students aged 8- 12 years old will survey:

+ ∆ The desired difference between the rate obtained from the sample (p) and the proportion of the population (P), taken is 0,015.

+ α: statistical significance, which is 0.05 corresponding to 95% confidence. Correspondingly, we have Z1-α / 2 equal to 1.96. We get n = 640, and rounding up the number we will choose 720 primary school students to participate in the survey.

2.4. The method of data collection

2.7. Errors and measures to reduce errors

+ There is no guarantee of randomness in selecting communes, households and students.

+ Subject does not understand the question, leading to a wrong answer.

+ Not getting enough test samples.

+ Sample test is not correct.

+ Professional training, technical guidance for officers participating in the investigation.

+ Investigators must remember the questionnaire by heart, approach the object politely, openly and sincerely. When the investigating subject is confused, it is necessary to clarify the question.

3. RESULTS OF THE STUDY

Comment: The average age of subjects is 34.4. In which the highest age is 49 years old, the lowest age is 18 years old.

Comment: The majority of women surveyed are farmer (54.6%), the second most numerous group of people are working as workers (22%).

Table 4. Use of salty spices

Comment: Most of the surveyed households used fish sauce (98.1%). The proportion of households using salt in food processing is very small (11.9%), most of them use seasoning powder (93.9%).

Table 6. Results of the quantitative iodine test in salt and broth

Comment: All salt and seasoning powder samples tested did not contain sufficient iodine at preventive levels (between 20 and 45 ppm).

3.3.  Evaluate the impact of iodine deficiency on the high risk subjects 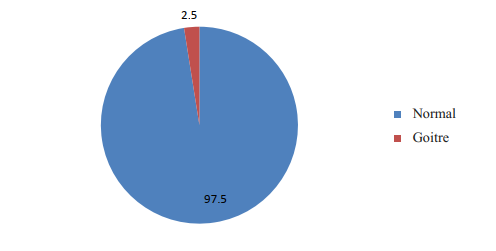 Comment: The rate of goitre in primary school students accounts for 2.5%.

Comment: Goitre level is mainly at level 1A, accounting for 94.4%.

Comment: There is no relationship between gender and goiter in pupils. 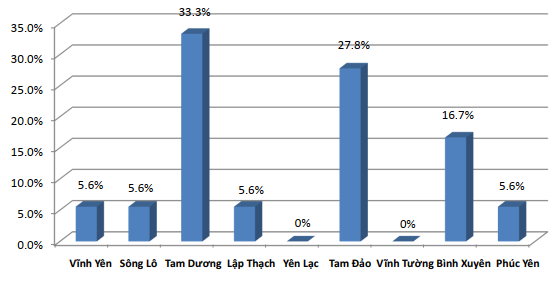 Comment: The goitre rate is lowest in 2 delta districts: Vinh Tuong and Yen Lac, and highest in the mountainous midland districts: Tam Duong, Tam Dao, Binh Xuyen. In two mountainous districts of the province: Song Lo and Lap Thach, the goitre rate is only at an average level, while this was the main district suffering goitre 10 to 15 years ago.

The test result of the median urinary iodine level in urine tested by the Center for Disease Control of Thai Nguyen province is: 8.5 mg / dl, at a mild iodine deficiency.

To ensure correct assessment of iodine use and iodine deficiency, the subjects must be representative of the community. The research results show that the average age of the study subjects is 34.4 years old, is at childbearing age and is usually the person responsible for housework and cooking in the family. The majority of women surveyed have secondary (40.2%) or high school education (38.9%), which is very convenient for the interview process and helps the survey results to be more accurate.

The majority of women surveyed are farmers (54.6%), the next significant group are working as workers (22%). The majority of subjects are employed women (97.8%). This characteristic is different from the 2016 study by Hong Huu Duc et al. in Binh Duong province in which 34.26% of women worked as housewife [4].

4.2. The situation of using iodized salt and iodized products

There was no relationship between gender and goitre. This is because the study age of the students is small (mainly 9-10 years old), so there is no gender development, the need for iodine is the same. The rate of goitre will be different between the sexes if the survey age is increased. The goitre rate in primary school students is 2.5%, of which 1A level is at 94.4%. The rate of goitre for students has decreased from 3.89% in 2010 to 2.5% in 2017. This is very good because although the rate of MI in the province is very low as above, it does not increase the goitre rate.

The prevalence of goitre is lowest in Vinh Tuong and Yen Lac (0%), in our opinion, this is a delta district with good economy compared to the rest of the province, fertile soil and adequate diet for the people. enough so there is no shortage of micronutrients, including iodine. The high rate of disease in Tam Duong (33.3%) and Tam Dao (27.8%) is because these are the two midland districts, the soil is washed away so the lack of iodine in the soil leads to the lack of iodine.

The results of the median urinary iodine test in the urine of women aged 18 – 49 are: 8.5 µg / dl, at a mild iodine deficiency. Data from 2015 up to now shows that this is the year with the highest level of urinary iodine (6.5 in 2015, 5.9 in 2016). The survey results also showed that the median urinary iodine level of Vinh Phuc has been in the range mild iodine deficiency since 2010, it will greatly affect the reproductive health of women of reproductive age, increases the risk of miscarriage, premature birth, stillbirth. There is a need for a follow-up study to evaluate the impact of iodine deficiency on this very vulnerable group because the iodine demand of women during pregnancy is 20-24.9 mcg / dl, which is one and a half times higher than normal level [5].

The study results show that there is no association between urinary iodine levels and the local goitre rate. We believe that the low rate of goitre in students in Vinh Phuc may be due to effective early detection and treatment. Goitre examination and detection are carried out by medical units from the commune health station regularly. The Provincial Preventive Medicine Center and the District Medical Center organize monthly examinations in remote communes with a schedule that is announced in advance.

Assessment of iodine deficiency disorders on the at-risk subjects – The goitre rate in primary school students is 2.5%, of which 1A level is mainly at 94.4%. There was no relationship between sex and goiter in these students.