Prevalence of thyroid dysfunction in patients with rheumatoid arhtritis

PREVALENCE OF THYROID DYSFUNCTION IN PATIENTS

Rheumatoid arthritis (RA) is a chronic autoimmune systemic inflammatory multisystem disease of unknown cause that may affect many tissues and organs, but principally attacks synovial joints, primarily affecting the peripheral joints in symmetrical pattern[9].

The concept of shared autoimmunity within individuals and families, sometimes referred to as the ‘‘kaleidoscope of autoimmunity,’’ has gained acceptance [19]. Co-existence of RA and psoriasis, multiple sclerosis, ulcerative colitis, lupus, type 1 diabetes mellitus and especially autoimmune thyroid disease (AITD) have been reported. Somers et al. conducted a series of population-based cohort studies, utilizing the United Kingdom General Practice Research Database, to assess intraindividual risks of coexistence of rheumatoid arthritis (RA), autoimmune thyroiditis (AIT), multiple sclerosis (MS), and insulin-dependent diabetes mellitus (IDDM) during 1990–1999. This study demonstrates coexistence of RA and AIT at higher than other diseases [19]. Conversely, Boelaert et al. found rheumatoid arthritis was the most common coexisting autoimmune disorder in  Graves’ disease 3,15% and Hashimoto’s thyroiditis 4,24% to compare with  many other autoimmune diseases such as type 1 diabetes, Addison ‘s disease, pernicious anemia, systemic lupus erythematosus, celiac disease, vitiligo, scleroderma, inflammatory bowel disease. [11] Although the exact pathogenic mechanisms of autoimmune disorders in AITD and RA are still not sufficiently defined, most of factors involved in the development of autoimmunity can be characterized as follows:

Polymorphisms of HLA-DR B1, CTLA4, PTPN22, FCRL3 and IL2RA are common for both AITD and RA, whereas some are specific for one or for the other disease.[12].

RA affects 0,2% to 1,3% of the adult general population [2]. In Vietnam, RA prevalence is about 0,28% [15]. In Cho Ray hospital, RA accounts for 15% patients visit at the Rheumatology Department. The disease is three times more frequent in women than men.  The prevalence rises with age and is highest in women older than 65 years[9].

For several decades an increased occurrence of thyroid disorders in patients suffering from RA has been documented. A hormonal dysfunction and/or AITD are present in 8% to 35% patients with RA [8],[13],[18]. There are some impacts of thyroid dysfunction on RA patients that was shown in many researches. For example, Elatta et al. . found in his study that higher levels of TSH are associated with higher grades of RA disease activity (ESR, DAS28, and dose of methotrexate)[5].

Moreover, Ratermanet al. . investigated the risk of cardiovascular diseases  in RA patients with hypothyroid abnormalities, the results showed in female RA patients, clinical hypothyroidism was associated with a fourfold higher risk of cardiovascular diseases  in comparison with euthyroid female RA patients independently of the traditional risk factors [6]. Unrecognized and untreated thyroid dysfunction can lead to life-threatening clinical states, such as myxedema coma and thyroid storm. Unfortunately, because of asymptomatic course of AITD in the initial phase diagnosis might be difficult to be established[14].

Besides, AITD manifestations may resemble those presented by RA, and some symptoms are exacerbated when both diseases co-occur[10]. From all the reasons above, some authors has suggested to screen RA patients for thyroid diseases [1],[6],[11],[14],[18].

Although AITD and RA share common physiopathological mechanism, the connection between AITD and RA is a topic with no definite results so far. In Viet Nam, this association has not been explored. As one of the busiest center for Rheumatology in Hochiminh city, we would like to unravel this association in order to establish a solid base for future research in this area. The purpose of the study are:

Patients: the current study was conducted at Cho Ray Hospital. Patients attending the Rheumatology Department from Jan 2016 to June 2016  (outpatient and inpatient) diagnosed with rheumatoid arthritis where enrolled in the study. 113 patients were diagnosed with RA basis of ACR criteria 1987 and ACR/EULAR 2010 ( 06 males and 107 females).

In all the patients the following examinations were performed:

28 joints assessment according to EULAR criteria. Activity of RA was evaluated using the Disease Activity Score (DAS 28) with 4 parameters.

Statistical analysis: Data analysis was done using Statistical Package for Social Sciences (SPSS software version-20). Means and standard deviations were calculated for quantitative data and proportions for categorical variables. To establish the relationship between categorical variables, Chi square testing was used and Independent t-test was used between continues variables with normal distribution assumed. Furthermore, regardless of categories, Pearson correlation Test was used to check the dependency of two continues variables. A P-value <0.05 is considered in rejecting null hypothesis. 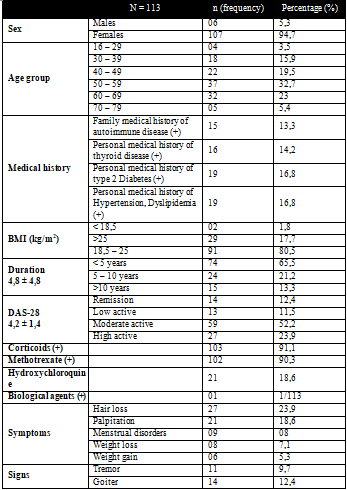 2. Prevalence of thyroid diseases in RA 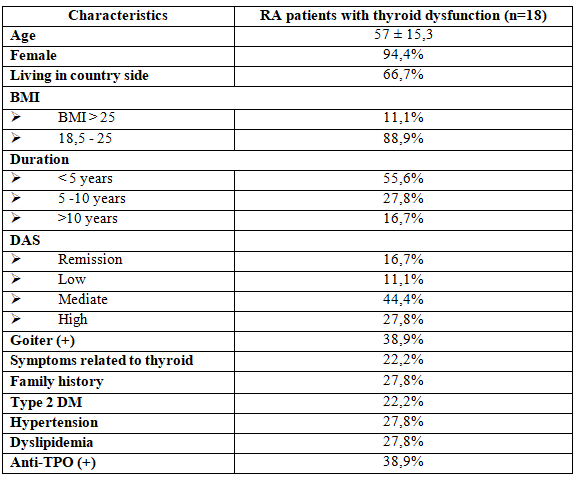 Comparison between demographic and laboratory data of rheumatoid arthritis patients and RA patients with thyroid dysfunction doesn’t show any significant differences. This may due to the 18 abnormal cases  have 5 sub-groups, and most of cases are subclinical. Therefore, we did the only bivariate analysis of the overt hyperthyroidism group (6 cases),we found the significance differences among palpitation and weight loss, age and use of medrol treatment 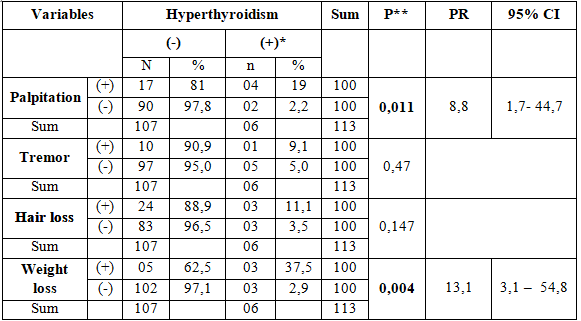 In bivariate analysis, significance difference among palpitation and weight loss, age and use of medrol treatment.

Significant differences in the prevalence of thyroid dysfunction in RA patients between studies may be explained by several factors. First of all, there is no universally consensus for the upper limit of normal TSH values, thus authors and clinicians worldwide accept different normal range. The second explanation for the spread frequency is due to iodine intake. Third, the time for taking samples  also greatly affected the outcome.

The most common thyroid dysfunction observed in this study was hyperthyroidism while in other studies hypothyroidism and subclinical hypothyroidism were the most common alterations among RA patients. The result was different to others but it is due to  the race characteristic of thyroid disorders in Asian, as Weigle and MacLeod reported in their report about the variation of thyroid diseases in by ethnicity[4],[21].

The prevalence of positive Anti-TPO in our study was 23,9% , but the AITD prevalence was only 8%.  This table below compares results between countries:

This high prevalence variability may be explain by certain factors. Firstly, there are difficulties on diagnosing AITD because it relies on the fact that there must be a positive of anti-thyroid a priority. Different methods for measuring Anti-TPO and the normal upper limit for Anti-TPO has not had the consensus. In our study, goiter was determined by clinical assessment instead of using thyroid ultrasound routinely in our study. This could lead to missing early changes in the structure of thyroid gland.

Thyroid dysfunction was more frequent in RA patients. Subclinical hyperthyroidism and overt hyperthyroidism were the most common alterations among RA patients. Of note, thyroid dysfunction was clinically silent during the study as only 22,2% RA patients with concomitant thyroid disorders have symptoms related to thyroid diseases. It is clinically important to screen thyroid function for RA patients: over 40 years old, orwith weight loss, palpitation, goiter, high DAS-28 score, orusing high dose of glucocorticoids.