Aimsof this study was to assess the serum leptin concentrations and insulin resistance, and the relationship between them with other factors in pre-diabetic population. Patients and Methods:A cross sectional study performed on 275pre–diabetic and 116 healthy subjects.  Fasting blood samples were assayed  for  leptin, glucose,  HbA1c, insulin,  lipid  profile and hsCRP concentrations. Results: Serum leptin level was significantly higher in the prediabetes group compare with the control group [4.57 (0.04 – 61.57) vs 3.67(0.04 – 28.94) ng/ml,P < 0.001 ]. The prevalence of hyperleptinemia was 41% and Leptin levels have been found to be correlated with female gender, overweight, viseral obesity, plasma insulin levels, HOMA-IR and plasma levels of hsCRP. The HOMA-IR were significantly higher in prediabetes group than control group [2.1 (0.20 – 12.3) vs 1.3 (0.01 – 6),P < 0.001 ].The prevalence of insulin resistance was 61% of prediabetic patients and the serum leptin level was considered as the independent risk factor of insulin resistance. Conclusions: The serum leptin concentrations and insulin resistance were higher in Prediabetic patients than in normal subjects and leptin level was associated with insulin resistance.

The prevalence of type 2 diabetic patient is increasing rapidly in both developed and developing countries and its complications account for the majority of the social and economic burden around the world. Today, many studies focus on the early identification and intervention of diabetes, especially at the stage of pre-diabetes. The prevalence of pre-diabetes, a intermediate hyperglycemic stage between normal and diabetes, is also increasing because of overweight and obesity.

The discovery of leptin in 1994 changed the knowledge of energy homeostasis and our view of adipose tissue from a simple energy depot to an active endocrine organ. Leptin is mainly produced in adipose tissue and plays an important role in regulating energy homeostasis, food intake and energy expenditure. Leptin has been developed as a therapy for some obese people, and for treating the life-threatening metabolic disorder lipodystrophy, other forms of diabetes.

Although leptin has an important role in obesity, its application in clinical practice is controversial because most of obese patients have increased serum leptin concentration, also called “leptin resistance phenomenon”. Many studies have concluded that there was a relationship between leptin and insulin, insulin resistance, and that leptin level can predict future diabetes.

Fasting venous blood samples were collected in the morning and measured: glucose (mg%), insulin (microU/ml), total cholesterol, triglyceride, LDL – c, HDL-c and hsCRP . HOMA – IR was calculated by [Glucose (mmol/L) x Insulin (mUI/L)]/22,5. Insulin resistance was defined as the highest quartile of HOMA – IR in control group (≥1.8 in this study). Serum leptin levels was measured by ELISA method and hyperleptinemia was defined as the highest quartile of leptin level in the control group
(≥ 6.2 ng/mL in this study).

Table1. Serum leptin levels and HOMA-IR in the study groups 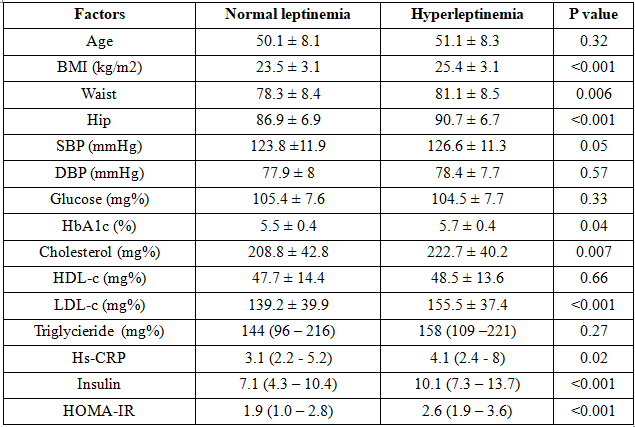 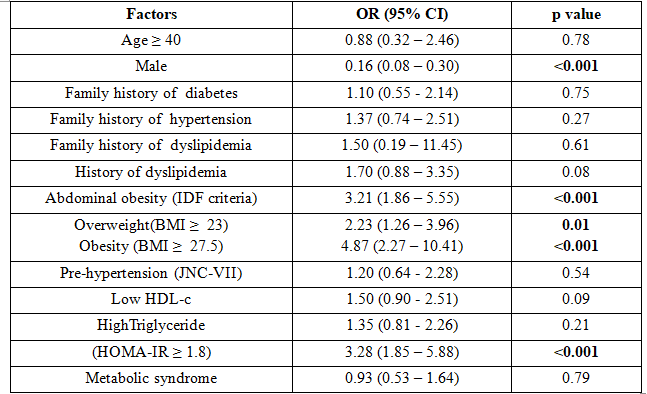 IV. DISCUSSIONS :
The median serum leptin concentration in this study was 4.57 (0.04 – 61.57) ng/mL and statistically significantly higher than control group. This result was similar to previous studies. Leptin level was associated with the whole body fat, and might play a role in the pathogenesis of type 2 diabetes. In 1999, J. McNeely noted that baseline leptin levels predicted diabetes independent of baseline total fat, insulin, insulin resistance, glucose, or age in separate multiple logistic regression models after 5 years of follow-up in men[8]. Several years later, Soderberg (2007)[12] and Paul Welsh (2009)[16] also concluded that leptin was an independent predictive factors for diabetes in the future, but only statistically

significant among men. These authorssuggested that the reason was high estrogen

levels, high leptin sensitivity in the brain and lower visceral fat mass in women. Another study has showed that the fasting glucose/leptin ratio can be used in addition to other ratios to accurately assess insulin resistance in subjects with hyperglycemia…[5]. In 2010, Guoying Wang carried out a study on 579 Chinese patients and showed that higher levels of serum leptin increased the risk of pre-diabetes with OR = 4.3 (95% CI: 2.1-8.7) in men and OR = 3.1 ( 95% CI: 1.5-6.2) in women[14]. According to Arleta Malecha – Polish Jedraszek, higher leptin concentrations were revealed in the type 2 diabetes group as compared to the control group, and this figure remained significant after adjusting for gender and age (p < 0.001). However, not all studies have reported increased levels of serum leptin in diabetic patients. A few studies in Asia showed that leptin concentration was lower in diabetic patients, but remained significantly correlated with BMI[1],[2]. The latest study in 2015 on obese adolescents reported lower blood leptin levels in people with type 2 diabetes compared with controls (18 ± 12 vs 37 ± 23 ng/mL, p<0.001), while adiponectin did not differ between the two groups[10].

In our study, leptin concentration was statistically significantly associated with insulin level, HOMA-IR, and increased the risk of insulin resistance in prediabetes independent of BMI and lipid profile. Many studies have concluded that leptin level was directly related to insulin sensitivity independent of body fat mass. Insulin resistance was associated with elevated serum leptin levels independent of body fat mass, even with low BMI[11]. According to Radka Lichnovska, leptin was an important risk factor of insulin resistance[7]. Some other studies indicated a direct correlation between fasting blood leptin and insulin (r=0.598, p=0.05) and HOMAI-IR[3],[9]. In addition, leptin concentration in those with metabolic syndrome were statistically significantly higher than those without metabolic syndrome[6],[13],[15].

In summary, many studies showed a correlation between leptin and diabetes, and elevated serum leptin level could predict future type 2 diabetes. Some studies in Asia showed a lower leptin level in diabetic patients, especially in non-obese diabetes. These results were inconsistent because of the study population, stages of diabetes, time of diagnosis …. as well as different BMI, insulin resistance and leptin measurement method.

However, most of studies have indicated a significant correlation between leptin and insulin, HOMA-IR and leptin increased the risk of  insulin resistance independent of BMI and whole body fat. Leptin resistance and the change in leptin concentration might  be similar to insulin resistance in diabetes but more studies are needed to confirm this. 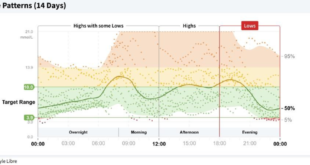