Hue University of Medicine and Pharmacy

Diabetes is a complex metabolic disease, not contagious, and cause severe complications to agencies the body such as heart attack, kidney failure, vision loss, memory impairment, diabetic foot, … This is the cause of death ranks third after cancer and heart disease.             Diabetes mellitus (DM) is associated with slowly progressive changes in the brain, a complication that is referred to as diabetic encephalopathy (DE). DE is a term that encompasses functional impairment of cognition, cerebral signal conduction, neurotransmission and synaptic plasticity, and underlying structural pathology associated with diabetes.

Not many people have knowledge about the risk and complications of diabetes, especially the little know complications neurocognitive disorder with symptoms such as memory loss (verbal memory, memory images, memories of work, short-term memory and long term memory), loss of attention, impaired information processing speed, reduced ability to speak fluently, reducing the daily living activities , personality changes, depression, … long-term risk of progressing to dementia if not treated promptly. In Vietnam, the percentage of patients with diabetes, including type 2 diabetes have a state of depression, memory loss and Alzheimer’s expression but also increasingly not interested in fair treatment . Causes and risk factors pathogenesis unclear, diagnostic methods, treatment and prevention of the risk of neurocognitive disorder , dementia has not been determined, haven’t many studies to compare the relationship between dementia and the risk factors in patients with type 2 diabetes. Stemming from the above issues, we conducted this study aims topics:  1.To evaluate neurocognitive disorder (NMD) by MMSE and MoCa neuropsychological with risk factors. 2. Correlations were studied between NMD and MRI

– >50 age, irrespective of gender, ethnicity, occupation.Educational background: from primary school or higher (with literacy).Criteria for type 2 diabetes diagnostic according to the ADA 2015, update ADA 2016. These patients were examined by the cognitive assessment scale: MMSE and MoCA.Stratified neurocognitive disorder by DSM 5. Brain MRI

Not included in the study of objects:

– The data collection was carried out according to the sequence of steps:

– Step 2: Assessment the neurocognitive by MMSE and MoCA scales and stratified by diagnostic scale DSM 5

Assess the level of neurocognitive through MMSE scale:

Assess the level of neurocognitive disorder via MoCA scale:

Assess the level of awareness achieved when: MoCA ≥ 26 points.

3.1. The degree of neurocognitive disorder of subjects through MMSE  scale

Table 3.1. The degree of neurocognitive disorder by MMSE

3.1.2.  The degree of neurocognitive disorder of subjects through MoCa scale

Table 3.2. The degree of neurocognitive disorder of subjects through MoCa scale

3.2. The correlation between the degree of neurocognitive disorder  and risk factors

Table 3.3. The correlation between the degree of neurocognitive disorder

and risk factors in clinical practice

Table 3.4. The correlation between the degree of neurocognitive disorder  and risk factors in subclinical

– The blood cholesterol was inversely correlated closely with levels of cognitive decline (p <0.01)

3.3. Cut off and AUC- ROC between the risk factors with MMSE and MoCa scale

3.3.1. Cut off and AUC- ROC between the risk factors with 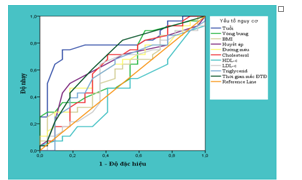 Map 3.1. Cut off and AUC- ROC between the risk factors with MMSE scale

3.3.2. Cut off and AUC- ROC between the risk factors with MoCa scale 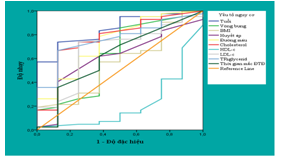 Map 3.4:Cut off and AUC- ROC between the risk factors with MoCa scale

3.4.3. Compare the level of assessment neurocognitive disorder of MMSE and MoCA 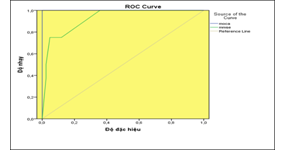 Map 3.3. Compare the level of assessment NMD of MMSE and MoCA

of MMSE and MoCA

The area under the ROC curve between MoCA scale to risk factorslarger than the MMSE scale: age, Waist circumference , BMI, Chol, LDL-c, Triglycerid.

3.4. The correlation between brain MRI and MMSE & MOCA

Table 3.6. The correlation between brain MRI and MMSE & MOCA

The volume of lateral ventricles in type 2 diabetes have major neurocognitive disorder higher  the subjects with normal neurocognitive function. This difference is statistically significant (p <0,0001)

Jeroen de Bresser et al (2010) had showed the relationship between brain atrophy and white matter encephalopathy in the diabetic patients through MRI. This research had showed association between ventricular volume expansion process affects the hippocampal atrophy and thalamus, as well as the lesions appeared typical defect microvascular disease in the brain diabetic patient [6]

A survey in 1125 subjects with diabetes (CASCADE) by Reinhold Schmidt et al (2004) had showed a close correlation between the level of quite cerebral atrophy, white matter brain damage high, multi-lacunar infarction defect in control groups [9]

3.4.2. The degree of neurocognitive impairement  by DSM 5

Apply the DSM 5  scale have update in 2016 so that the stratification of subjects cognitive research after evaluating the classification with or without neurocognitive disorder by Moca scale:

3.4.3. The correlation between brain MRI and DSM 5

Table 3.7: The correlation between brain MRI and DSM 5 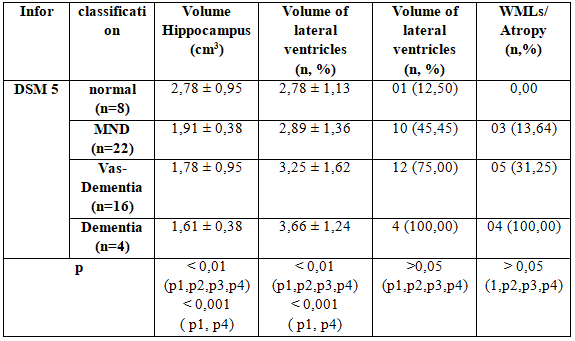 Comparison with other studies:

The CASCADE research, Reinhold Schmidt et al (2004) had showed a close correlation between the level of quite cerebral atrophy, white matter brain damage, lacunarl infarcts than in the control group.

Stratified according to NMD from mild to dementia, we found that hippocampal volume reduction between the study groups. Specifically in the group with normal cognitive with NMD group to change about the volume hippocampus 2.78 ± 0.95 compare with 0.38 ± 1.91 respectively; between dementia groups have the most decreased volume  hippocampus : 1.61 ± 0.38 to 2.78 ± 0.95 compared to the normal groups (p <0.001)

Similarly the ventricular volume changes also increased the proportion with the severity of NMD: 2.78 ± 3.66 ± 1.13 versus 1.24 (p <0.001).It is worth noting that at the time of expression mild cognitive impairment (NMD) are not the ventricular volume and the volume of the hippocampus has also changed pretty. And this change has tended to increase with the severity and duration of diabetes .

White matter brain damage and brain atrophy situation was also discovered 100% of patients with dementia and 31.22% for vascular dementia, 13.64% decline in the group with mild cognitive neurological . However, this difference is not statistically significant.

We have many results in this research:

4.2. The common form of brain injury on brain MRI in patients with diabetes is to reduce the volume of the thalamus, lateral ventricular volume expansion, cerebral infarction and encephalopathy defect + white matter atrophy.

4.6. 100% white matter brain damage and brain atrophy condition occurs in patients with dementia and 31.22% for vascular dementia, 13.64% decline in the group with mild cognitive neurological. However, this difference is not statistically significant (p> 0.05)

4.7. It should be noted that at the moment the signs of mild cognitive impairment (NMD) are not only the ventricular volume and hippocampal volume but also changes in brain white matter lesions and brain atrophy appear . And this change has tended to increase with increasing severity (increased blood sugar, increased blood fats, blood sugar several times), and duration of diabetes.

The neurocognitive disorder in the diabetic patient have showed that diabetic encepalopathy (DE),DE presents itself both mentally and physically. The  leading  clinical  syndrome  of  DE is cognitive dysfunction. Development of mild to moderate cognitive dysfunction significantly reduces  the  quality  of  life  of  the  diabetic patients, and is associated with significant risk of subsequent development of dementia and severe disability.

The neurocognitive disorder is a resistant cerebral pathology that occurs in type 2 diabetic patients as a result of chronic hyperglycemia, disturbances of signaling effects of insulin in the brain as well as metabolic disorders induced under these conditions. Association of neurocognitive disorders with disease duration, HbA1c level, impaired brain activity, cerebral hemodynamics and cerebrovascular reactivity was established. Chronic cerebrovascular accident plays a role in the development of DE, the pathogenesis of which is due to formation of diabetic cerebral micro- and macroangiopathy. The result pathobiology of the accumulation of β-amyloid and tau protein which have destroyed the structure of the brain cells .

DSM 5 criteria for the clinical diagnosis Demential or Vas-Demential, Mild Cognitive Impairement- as recommended by the National Institute for Health and Care Excellence (NICE).

Screening for diabetic encephalopathy by MoCa or MMSE and MRI scanning may show evidence of infarcts, cortical lacunae, and extensive white matter changes. Appearances will vary depending on the pathogenesis. It may help distinguish VaD from Alzheimer’s disease. Medication reviewis important to ensure that cognitive decline is not due to medication. Other reversible organic causes alsoneed to be excluded.