Euthyroid  sick syndrome can be described as abnormal findings on thyroid function tests that occur in the setting of a nonthyroidal illness (NTI), without preexisting hypothalamic-pituitary and thyroid gland dysfunction. Multiple alterations in serum thyroid function test findings have been recognized in patients with a wide variety of NTIs without evidence of preexisting thyroid or hypothalamic-pituitary disease. The most prominent alterations are low serum triiodothyronine (T3) and elevated reverse T3 (rT3), leading to the general term “low T3 syndrome.” Thyroid-stimulating hormone (TSH), thyroxine (T4), free T4 (FT4), and free T4 index (FTI) also are affected in variable degrees based on the severity and duration of the NTI. As the severity of the NTI increases, both serum T3 and T4 levels drop and gradually normalize as the patient recovers. Despite these abnormalities, treatment of these patients with thyroid hormone, while controversial, appears to be of little benefit and may be harmful. It is possible that the changes in thyroid function during severe illness are protective in that they prevent excessive tissue catabolism.

The abnormal thyroid function is described  among patients hospitalized in an intensive care unit. Although with the laboratory abnormalities, they had no thyroid gland diseases. There are terms used to describe that: Euthyroid sick syndrome (ESS), Non thyroidal illness syndrome (NTIS), Thyroid allostasis in critical illness-tumours-Uremia and starvation (TACITUS), Low T3 T4 syndrome, Low T3 syndrome.

Mild thyroid disease is very common and may present with only vague non-specific symptoms, especially in the elderly. Such patients can be performed thyroid function tests, the results of these  tests become proplematic when being  performed in patiens who have any significant co-existing illness (organic or psychiatric). 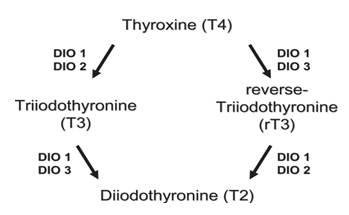 The majority of hospitalized patients have low serum T3 concentrations, as some patients who are ill. There are often low total T3, low FT3, high rT3. Changing  in T4 and TSH if the patients are more severe.

From 15 to 20% of hospitalized patients and up to 50% patients in Intensive care units have low serum T4 syndrome: reduced total T4, normal free T4 in patients not too severe.

Almost all patients have low TSH but detectable, greater than 0.05mU/L but less than 0.3 mU/L. Medications used  for hospitalized patients can cause suppression of TSH secretion such as Doputamine, Glucocorticoids, octreotide. Patients with severe non thyroidal illness may have acquired transient central hypothyroidism. This suggestion  is support by the following observations:

The neurons of PVN that secrete TRH are innervated by neurons from the ARC that contain MSH, NPY, AGRP and GABA. Both NPY and AGRP inhibit TRH gene expression, an action prevented by leptin. Figure 8. Summary of the mechanism that lead to thyroid hormone changes in non thyroidal illness syndrome.

The magnitude of the changes in thyroid function in patients with non thyroidal illness varies with the severity of the illness. T4 value correlates with outcome. When a patient recovers from illness, abnormalities in serum TSH and thyroid hormone concentrations eventually resolve. In some patients, however, TSH may rise transiently above the reference range in this recovery phase. Assessment of thyroid function in patients with non thyroidal illness is difficult, especially among those hospitalized in an intensive care unit.  Many of them have low T4, free T4, T3, and their serum TSH may also be low. The mechanisms behind the hormone changes seen in non thyroidal illness are now becoming clearer, the changes represent a physiological adaptation, attempts to restore thyroid hormone levels could even have adverse effects on patient outcome.