Background: Neonatal diabetes mellitus (NDM) is defined as hyperglycemia diagnosed within the first 6 months of life and can result from mutations in at least 23 different genes. The most common genetic cause is activating mutations in the KCNJ11 and ABCC8 genes which encode the subunits of the beta-cell KATP channel. In these patients failure of the channel to close in response to increased intracellular ATP results in impaired insulin secretion. Sulfonylureas are an effective treatment for the majority of patients with this genetic subtype as the drug binds to and closes the KATP channel by an ATP-independent route. Patients and method: We identified 20 patients with NDM resulting from ABCC8 or KCNJ11 mutations who were treated at the Vietnam National Hospital of Pediatrics. We assessed the outcome of oral sulfonylurea therapy in all patients for whom transfer was attempted and compared the clinical characteristics of those with ABCC8 and KCNJ11 mutations. Results: Nineteen patients successfully transferred from insulin to sulfonylurea therapy. In the remaining case remission of the diabetes occurred prior to transfer. Glycated hemoglobin levels improved in all patients who switched to sulfonylurea therapy. HbA1c decreased from 8.0 ±2.2% when treated with insulin to 5.9 ±1.1% when treated with SU, blood sugar fluctuation was also less when on SU treatment compared to insulin treatment (from 3-17 mmol/l on insulin to 4-10 mmol/l on SU). Conclusions: This is the first case series of KATP channel NDM reported from Vietnam. Sulfonylurea therapy is safe in the short term for patients with diabetes caused by KCNJ11 or ABCC8 mutations and is more effective than insulin therapy consistent with all the studies reported to date.

Diabetes Mellitus presenting as hyperglycemia during the first 6 months of life is a rare disorder with an incidence of 1 in 215,000-500,000 live births [2;3]. In approximately 50% of patients diabetes remits so called transient neonatal diabetes (TNDM), whilst in the remainder the diabetes is permanent (PNDM). Mutations in over 20 different genes are known to cause NDM with the underlying mechanism of disease varying according to the genetic aetiology. For example mutations in GATA6, PDX1 and PTF1A affect the development of the pancreas or islets whilst INS and EIF2AK3 mutations decrease beta cell mass as a result of increased apoptosis. In contrast, mutations in the ABCC8, KCNJ11 and GCK genes affect specific components of the insulin secretion pathway leading to diabetes [5].

Activating mutations in the KCNJ11 and ABCC8 genes, which encode the Kir6.2 and SUR1 subunits of the ATP-sensitive potassium (KATP) channel, are the most common cause of NDM [4]. In a healthy individual before a meal, the activity of KATP channels reduces the membrane potential (Vm) of pancreatic β-cells below the threshold for activation of voltage-gated Ca2+ channels, thus turning off the stimulatory action of Ca2+ on insulin secretion.

During a meal, blood glucose increases and enters β-cells via glucose transporters. The conversion of glucose to glucose-6-phosphate by GCK is the key step governing substrate input into the glycolytic pathway in β-cells. Subsequent metabolism via glycolysis and oxidative phosphorylation raises the ATP/ADP ratio. This increase closes KATP channels, depolarizing the β-cell membrane to allow Ca2+-dependent insulin secretion via activation of voltage-sensitive Ca2+ channels. Patients with activating KCNJ11 or ABCC8 mutations have KATP channels with decreased sensitivity to ATP inhibition. Consequently, their channels remain open in the presence of glucose, thereby reducing insulin secretion.

These patients present with diabetic ketoacidosis or marked hyperglycemia with low levels of circulating endogenous insulin and are therefore treated with insulin. Sulfonylureas have proven to be effective treatment for individuals with NDM resulting from KCNJ11 or ABCC8 mutations [6] as these drugs bind to and close KATP channels by an ATP-independent route, thereby causing insulin secretion.

Participants include patients diagnosed with diabetes mellitus before 6 months of age who were initially treated with insulin at Vietnam National Children’s Hospital. Eligibility criteria were: a/ persistent blood glucose over 150 – 200 mg/dl, b/ onset < 6 months of age and c/ ABCC8 or KCNJ11 mutation identified by genetic testing.

Demographic details including sex, date of birth, gestation and birth weight, date of diabetes diagnosis and ethnicity were recorded. Treatment prior to genetic analysis (insulin type and dose) and whether the patient was successfully transferred to sulphonylurea treatment was documented.

All clinical features were compared between patients with a KCNJ11 and ABCC8 mutation who successfully transferred onto sulfonylureas using a Mann-Whitney U test with the exception of A1c values which were compared using a T- test to assess glycemic control. Differences with a P value < 0.05 were considered statistically significant.

DNA was extracted from peripheral blood according to standard protocols. Coding and flanking intronic regions of the KCNJ11 (NM_000525.3) and ABCC8 (NM_001287174.1) genes were analyzed by Sanger sequencing as previously described (Ref).

Transfer to sulfonylureas from insulin

All patients with an ABCC8 or KCNJ11 mutation were transferred from insulin to sulfonylurea treatment using established protocols (for further details see http://www.diabetesgenes.org/content/transferring-patients-diabetes-due-kir62-mutation-insulin-sulphonylureas).

Briefly inpatients underwent a rapid switch where glibenclamide was started at a dose of 0.1 mg per kilogram twice daily and was increased daily by 0.2 mg per kilogram per day.

In all patients insulin was gradually withdrawn as sulfonylurea was introduced depending on blood glucose. The dose of glibenclamide was increased until insulin independence was achieved or the dose was at least 0.8 mg per kilogram per day.

We identified 20 patients with NDM resulting from an ABCC8 (n=11) or KCNJ11 mutation (n=9). The clinical characteristics of these patients and the genetic mutations identified are provided in Table 1. 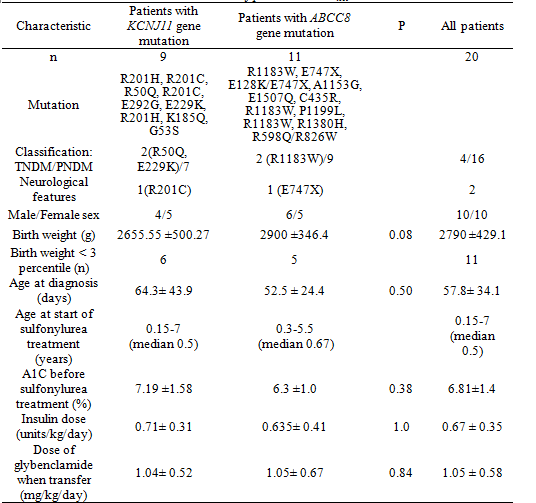 For 19 of the 20 patients transfer from insulin to sulfonylurea treatment was successful, in the remaining patient diabetes  remitted after 5 months of insulin treatment. Four of 20 patients had transient neonatal diabetes. The clinical characteristics of these patients are provided in table 2.

Two of the twenty patients, one with a KCNJ11 mutation (Patient X) and one with an ABCC8 mutation (Patient Y), had neurological features including developmental delay and hypertonia. Both individuals successfully transferred to sulfonylureas which resulted in improved mental and motor development. One case with a heterozygous p.R201C KCNJ11 mutation is currently 9 years of age and can understand simple sentences and has good eye contact, HbA1c decreased from 8.25 ± 0.2 % with insulin treatment to 6.65 ±0.07 % with SU treatment. During insulin treatment, she had been admitted to hospital twice with DKA and convulsions due to severe hypoglycemia. After transfer to SU, there was no hypoglycemia or DKA. The second case, who is homozygous for a novel ABCC8 mutation, p.E747X  [13] currently 11.5 years of age and can walk, speak short sentences and understand and answer some simple questions. When treated with insulin his HbA1C was 8.5 ±0.4 % with blood glucose 4-20 mmol/l. Following transfer to SU his HbA1c reduced to 5.3 ± 0.2% with blood glucose fluctuations between 5-10 mmol/l.

Three patients in our study were heterozygous for the ABCC8 mutation p.R1183W, all were successfully transferred to sulfonylurea. Two patients are classified as having TNDM following a remission of diabetes at 6 months and 14 months respectively. In the remaining patient the diabetes has persisted, he is currently aged 14 years and 9 months  and is  treated with an SU dose of 0.15 mg/kg/day (HbA1c 7.4%). He has normal growth (166cm in height and 69 kg weight) and mental development.

Two patients are heterozygous for the KCNJ11 mutation, p.R201C. Both have similar clinical features being diagnosed with NDM before 5 weeks of age (at 36 days and 7 days respectively) and having a low birth weight, < 3rd percentile (2600g and 2300 g).

Both patients were admitted into our hospital with features of severe diabetic ketoacidosis with pH of 6.9 and 7.2 respectively. The first patient has severe developmental delay with hypertonic crisis, whilst the second patient who now is 4.5 years old has normal neurological development.

Comparison of clinical characteristics between patients with KCNJ11 and ABCC8 mutations showed no statistically significant differences in birth weight or age at diagnosis (table1). Treatment requirements were also not significantly different between the 2 groups (Fig. 1). 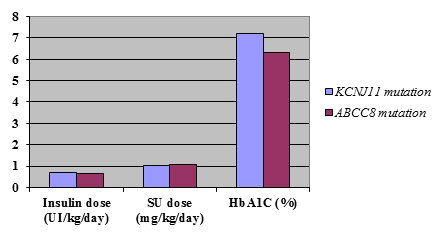 Figure 1. Comparison of clinical characteristics of patients with KCNJ11 and ABCC8 gene mutations who successfully transferred from insulin to sulfonylureas

Although ABCC8 patients seemed to require a slightly higher dose of sulfonylurea when transferred, with an average of 1.05± 0.67 mg/kg/day compared with 1.04± 0.52 mg/kg/day in KCNJ11 patients, this difference was not statistically significant (P =0.47).

None of the patients experienced side effects when treated with sulfonylureas. Renal and liver functions were normal during sulfonylurea treatment.

Whilst multiple cohorts of patients with KATP channel mutations have been published, this is the first case series describing patients from Vietnam.

In 1995 von Muhlendahl and Herkenhoff noted that the age-adjusted birth weight was reduced in patients with NDM [7] and this is now a well-recognized feature of this disease having been observed in multiple NDM cohorts from ethnically diverse groups [8][9][10][11][12][14][15][16]. In these patients it is thought that the intrauterine growth retardation (IUGR) can be attributed in part to insulin acting as a fetal growth factor, coupled with the failure of maternal insulin to cross the placental barrier [17] unless it is bound to an antibody [18, 19]. In our study, we found that the majority of patients were diagnosed under 2 months of age (11/18) with 11/18 (61.1%) having a low birth weight (< 3rd centile).

In our study, 19 of the 20 patients with KCNJ11 or ABCC8 mutations successfully transferred from treatment by insulin injection to oral sulfonylurea therapy. One further patient had a remission of diabetes at the age of 5 months before transfer to sulfonylureas could be initiated.

Compared with other studies, the rate of patients who successfully transferred to sulfonylurea in our cohort (100%) is higher. This rate was 90% in Pearson et al [6] and 85% in Rafiq et al [20]. HbA1c decreased significantly after transfer to SU. It is particularly encouraging that in our study, this level was achieved without any severe hypoglycemia and no increase in mild-to-moderate hypoglycemia, although further long-term study is needed to assess this finding fully.

The near normalization of glycated hemoglobin levels with minimal hypoglycemia reflects regulated insulin secretion, as demonstrated by continuous glucose monitoring

Comparison of treatment between patients with KCNJ11 and ABCC8 mutations showed no significant differences in birth weight, age at diagnosis, treatment requirement and sulfonylurea dose. Rafiq et al’s study [20], which investigated patients, showed significant differences in treatment requirement between patients with ABCC8 and KCNJ11 mutations. In their study, ABCC8 patients needed a lower dose of insulin before transfer (median 0.4 units/kg/day [0.2– 0.9]) compared with KCNJ11 patients (0.7 units/kg/day [0.1 -1.2] (P = 0.002). ABCC8 patients also required a lower dose of sulfonylurea after transfer, with a median of 0.26 mg/kg/day (0.07– 0.63) compared with 0.45 mg/kg/day (0.05–1.50) in KCNJ11 patients (P = 0.005). This discrepancy may be due to our small sample size or may reflect the higher prevalence of TNDM mutations in the Rafiq cohort  [20].

Despite the relatively high doses used in this study, sulfonylurea treatment appears to be safe, with the only reported side effect being transitory diarrhea in some patients. Doses were reduced at the discretion of the clinician, usually in response to measurements of capillary blood glucose. Continued follow-up will be required to determine the long-term outcome of sulfonylurea therapy in this group of patients.

In conclusion, we found that the all patients in our cohort with ABCC8 and KCNJ11 mutations could be successfully treated with oral sulfonylurea treatment even if they had previously been treated with insulin. No statistically significant differences in birth weight, age of diagnosis, treatment requirement and sulfonylurea dose were detected between patients with ABCC8 and KCNJ11 mutations. After 43.4 ±27.6 months of SU treatment, we saw that Sulfonylurea therapy is safe in the short term for patients with diabetes caused by KCNJ11 or ABCC8 mutations.