Hue University of Medicine and Pharmacy

Hypertriglyceridemia (HTG) is a rare but well-known cause of acute pancreatitis (AP), which can be a life-threatening complication if the degree of HTG is severe enough. Beside plasmapheresis and heparinzation, insulin stimulates lipoprotein lipase and decreases serum triglyceride level.However, its efficacy in hypertriglyceridemic pancreatitis (HTGP) especially in nondiabetic patients is not well documented. We report a series of 12 cases of HTGP treated with infused regular insulin(0.05- 0.15 IU/kg/h)in order to reduce serum triglyceride level. The level of serum triglyceride was decreased rapidly and reached to a safe limit by the third day of treatment; Thiswas accompanied by the improvement of clinical symptoms and laboratory values. All the patients were discharged after 7 – 10 days.

Pancreatitis is a common clinical entity with multiple contributing etiologies whose mortality prevalence probably reaches into 20%[6]. Triglyceride (TG) level greater than 11,4 mmol/l are seen in a small but significant number of cases of AP, with estimates of7% of all cases. HTG is the third most common cause of AP after alcohol and gallstones[15], [19]. The clinical presentation of HTGP is similar to other causes of acute pancreatitis. Apart from conventional methods of treatmentsuch asbowel rest, nothing by mouth, intravenous hydration, analgesics, proton-pump inhibition, several less frequently used methods have been described in the literature to decrease the triglyceride levels rapidly, e.g. plasmapheresis, heparinization, and insulin infusion[1], [4], [12], [21]. Plasmapheresis is reported to have some complications such as hypotension, bleeding, anaphylaxis; moreover this modality is costly and not available in all medical centers. Heparin has the theoretical risk of hemorrhage in necrotic pancreatitis. And Insulin infusion seems to be easy and available in most of hospital. There have been reports in which heparin and insulin have been used for acute reduction of triglycerides, although there are no established guidelines for the efficacy of these modalities.

Wereport a series of 12 cases of hypertriglyceridemia induced acute pancreatitis treated with insulin infusion with the following aims:

This prospective study comprised of 12 patients admitted to the General Internal Department, Hue University of Medicine and Pharmacy Hospital with hypertriglyceridemia induced acute pancreatitis from March 2015 to October 2016. In addition to serum TG concentrations > 11,1 mmol/l ( 1000 mg/dl), at the time of admission to the emergency department, the patientswho were enrolled in this prospective study also fulfilled 2 of 3 featurres of acute pancreatitis: (i) clinical (suggestive abdominal pain), (ii) analytical (elevated serum amylase and lipase three times the upper limit of normal), (iii) radiological (abdominal ultrasound or CT).

The patients received treatment with  bowel rest, nothing by mouth, intravenous hydration, analgesics, and proton-pump inhibition. Besides, Regular insulin was administered intravenously in continuous infusion of 0,05-0,15 UI/kg per hour.

Glycemia was maintained between 8 – 11 mmol/l (144 – 198 mg/dl) by titrating dextrose 10% infusion, not titrating insulin. If glycemia was higher than 30 mmol/l, we stopped dextrose. The patients were followed by: glycemia each every 1 hour; electrolytes each every 4-6 hours; triglyceridemia each every 4-6 hours; amylase and lipase each every 12 hours. We went on gathering information on  the decrease in triglyceridemia level. The complications of insulin therapy,and the point of stoppinginsulin in all 12 cases.

A prospective analysis of 12 cases of HTGP  was performed. There were11 male, and 1 female patients; mean 35 years; range 30 to 45 years. All patients had epigastric pain, vomiting, and nausea. 75% patients enrolled in the study had a past medical history of alcohol addiction with higher than  80 gams alcohol per day. There were 2 cases found previous dyslipidemia.

The intravenous insulin dose we used for our 12 cases was from 0,05 to 0,15 UI/kg per hour. Triglyceride reduction ratios were evaluated. The mean decrease in TG levels within 24 h of using  insulin was 52,3 %. During 4 daysof study, the mean decrease in TG levels is from 52,27 mmol/l to 6,96 mmol/l. The complications that appeared during treatment were followed. There were 2 cases of hypoglycemia. The glycemia was under 2,0 mmol/l with autonomic symptoms.

There was 1 case of hypokalemia (K+  <2,29 mmol/l with clinical symptoms and ECG changes). None of the patients developed cerebral edema . As serum TG levels decreased into 5,7 mmol/l (500 mg/dl), we stopped insulin infusion. 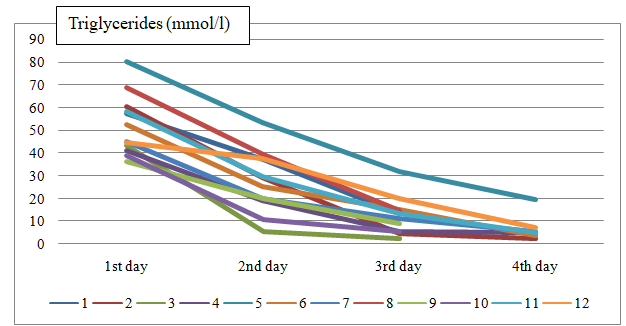 FIGURE 1: Serum triglycerides levels of 12 cases during the 4 days of hospitalization 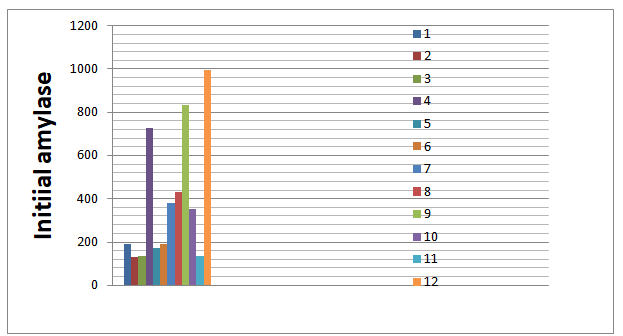 3.1. Relationship between TG and AP

Many authors generally believe that a serum TG level of more than 11,4 mmol/l increases the risk of AP[15],[2],[20]. A higher risk is seen at serum TG level of more than 20 mmol/l[1]. Conversely, pancreatitis itself can cause mild or moderate HTG (2- 10 mmol/l) because of many causes[1]. Therefore, it might be difficult to escape from the vicious cycle of pancreatitis and HTG. All of the 12 cases we studied hadserum TG level > 20 mmol/l, appropriate as the likely cause of AP.

Patients with type I, IV, and V hyperlipidemia in which HTG is associated are predisposed to develop pancreatitis. The majority of adult patients with familial hyperlipidemia and pancreatitis would have type V or VI defect. This fact was applied to both patients who had type IV hyperlipidemia. Panceatitis induced by type IV hyperlipidemia is generally caused by secondary precipitating factors (e.g., poorly controlled diabetes, alcohol use, estrogen and pregnancy, or medications that can increase the levels of endogenous lipid profile)[21].  Research by Fortson showed that a history of diabetes mellitus was present in 72%, hypertriglyceridemia in 77%, alcohol use of patients in 23%of patients [6]. In contrast , in our 12 cases, alcohol was seen in 75% cases, hypertriglyceridemia in 17%, only 1 case with diabetes mellitus.

The clinical course and physical examination of HTGP are similar to that of AP without evidence of hyperlipidemia[16]. There is no specific finding except general symptoms of AP in these cases. Remarkably, serum amylase in 50%of our cases at initial hospitalization was not high enough to diagnose AP. Accordingly, the diagnosis was significantly based on clinical presentation and diagnosic imaging. It easily led to delay in AP diagnose and treatment. According to Hahn[18], normoamylasemia is possible in about 50% of patients with hypertriglyceridemia-induced pancreatitis. In addition, according to Fortson[6], amylase was elevated two times normal in 54%, and lipase was elevated two times normal in 67%. The mechanism is believed to be the interference with in vitro determination of the actual amylase level by disturbance of the calorimetric method. Serum TG > 5,7 mmol/l might effect the laboratory testing and make amylasemia falsely low[11]. The plasma retrieved from the patient often has a milky appearance[7].

We used initial treatments for hypertriglyceridemic pancreatitis similar to those of other causes, including bowel rest, nothing by mouth, intravenous hydration, analgesics, proton-pump inhibition. Currently, there is no clear evidence that HTGP differs from other types of pancreatitis in terms of frequency of necrosis, complications, or outcomes. A similar approach to medical and initial diagnostic management is thus indicated[2]. Lipid should be restricted  because they can increase serum TG level[20].

In-addition , there are various modalities in the treatment of hypertriglyceridemic pancreatitis, such as insulin, heparin, plasmapheresis[1],[4],[12],[21].

A number of case reports have shown that plasmapheresis is effective in reducing triglyceride levels by replacing plasma with donor plasma lacking in triglycerides. However, Yeh et al. found that complications developed in 12%, and 2 patients died[21]. Complications related to the plasmapheresis were found to be hypotension, bleeding and anaphylaxis. Futhermore, it can be an expensive treatment option and is not available in all medical centers.

We used intravenous insulin with a dose range of 0,05- 0,15 IU/kg/hr. Actually, there is no standard protocol for insulin administration in the context of HTGP has been defined.The authors have achieved success with insulin dose titrated from an initial rate of 0,1- 0,3 UI/kg/kr[19], which is higher than the dose we use. Once an effective insulin infusion dose has been achieved, we have kept this constant while the dextrose infusion is titrated to maintain euglycemia( 8 – 11 mmol/l) , contrary to DKA where treatment is accomplished  by titrating insulin.

Mikhail et al. reported lowering TG from 87,8 mmol/l to 2,8 mmol/l in one patient using only intravenous insulin at 3-9 UI/ hour for 4 days while maintaining euglycemia[14].

Anderson et al found that with insulin therapy, serum triglyceride levels had fallen below 5,65 mmol/l on day 5 with 83% and pancreatitis improved[3].

In our patients, serum triglyceride levels decreased and pancreatitis symptoms improved in 7 to 10 days with insulin infusion.

In comparison of those treated by insulin and heparin, Henzen et al. described successful treatment of hypertriglyceridemia-induced pancreatitis in five patients. They reported a decrease in serum triglyceride from a mean of 43,57 mmol/l to 10,12 mmol/l within a mean of 2.8 days[9].

In all the patients described in previous case reports, the mean decrease in triglyceride levels was about 50% within 24 h of use of intravenous insulin and heparin.

In our patient, serum triglyceride levels also decreased by 52,3% within 24 h of starting insulin, which is similar to all the cases described.

The research of Anderson and David showed that insulin may be stopped as serum triglycerides levels decreased to< 5,7 mmol/l[18]. In our patients, we stopped insulin infusion at that point. SerumTG levels did not increase again.Infact, allof theseprevious cases could decrease TG into perfect level in short hospitalization. D. Jain et al. stopped using intravenous insulin at day 3 since clinical presentation improve significantly but the level TG was still 28 mmol/l[12]. The patient was discharged at day 6 when TG was still 15,8 mmol/l followed by treatment with simvastatin and fenofibrate. After 3 months, serum TG was 4,4 mmol/l. The point ofstopping insulin would appears different among various researchs. However, the majority of authors agree that decreasing serum TG below 11,4 mmol/l seem to prevent AP reccuring when accompanied by lifestyle modifications, such as weight loss, limiting intake of fat and simple carbohydrates, and abstinence from alcohol, control of secondary risk factors such as diabetes, and discontinuation of offending medication[11],[2],[20].

However, after lack of clinical improvement and significantly elevated triglyceride levels with treatment of insulin therapy, other options need to be considered. Plasma exchange seem to be effective and safe for hypertriglyceridemic necrotizing pancreatitis.

In comparision of these 12 cases of HTG-induced AP, it is relatively easy to be aware that the most important thing is to early diagnose and present right treatment for itself . The use of insulin infusion as seen in this case report has been demonstrated to be a viable option for rapid improvement in symptoms associated with acute pancreatitis associated with elevated triglycerides. Besides, it should closely monitor the serum of triglyceride levels, electrolyte especially potassium, amylase, lipase.

Hypertriglyceridemia is a significant cause of acute pancrease appearing more and more and more in Vietnam after alcohol and gallstones. Beside common characteristics, acute pancrease has its own features. Hence, specific modalities beside classical managements in treatment should be considered by physicians. Our results of treatment of 12 cases are suitable for literatures and some researchs showing that lipoprotein lipase stimulation by insulin application are safe and effective for hypertriglyceridemic pancreatitis.Clinical manifestation of hypertriglyceridemic pancreatitis is similar to that of other cause of acute pancreatitis.Amylase of 50% our cases is not high enough to diagnose acute pancreatitis.An insulin dose between 0.05 – 0.15 UI/ kg/hr is usually effective in decreasing 52,3%  initial triglycerides after 24 hour, with a goal of less than 5.7 mmol/l.Insulin treatment may cause complications as severe hypoglycemia, hypokalemia. Some recommendations are ruled out from our study. In patients with typical symptoms of pancreatitis, be sure to check tryglycerides, even if amylase is normal.

Follow glycemia each 1hr, electrolytes each 8 hr, triglycerides after first 6hr then each 8 – 12 hr. In medical centers lacking plasmapheresis, insulin treatment can be used to safely and rapidly decrease triglycerides in HTGP.If triglycerides do not decrease with sufficient insulin dose, we consider other options: plasmapheresis.