Diabetes is an important chronic disease which incidence is globally increasing and now considered as an epidemic [1].

Individuals with diabetes and with chronically poor metabolic control can experience microvascular and macrovascular complications leading to a significant burden for them and for society. Cardiovascular diseases (CVD) are the most prevalent cause of mortality and morbidity among people with type 2 diabetic patients. The rate of mortality due to heart disease and stroke in adult people with diabetes was two to four times higher than those without diabetes.

The underlying mechanisms that cause accelerated atherosclerosis in patients with diabetes and consequently an increased prevalence of CVD are poorly understood.

The purpose of this paper is to describe the association between poor glycemic control, oxidative stress, markers of insulin resistance, and of low-grade inlammation that have been suggested as putative factors linking these two conditions [3], [4], [5].

The link between serum hs-CRP and the other risk factors in diabetic patients such as poor glycemic control, obesity, hypertension, and dyslipidemia still remain to be fully elucidated.

The study design was cross-sectional. A total of 79 type 2 diabetic patients admitted to the Endocrinology Department of Bachmai Hospital and Hanoi Medical University Hospital from Feb to Oct 2014. The subjects were of both sexes, in the age group of 40-78 years old. Detailed interview using a structured questionnaire were performed with physical examinations, and laboratory findings of these subjects were done comprising serum hs-CRP; HbA1c, microalbuminuria, lipid profile. T2D was diagnosed in accordance with ADA 2012 criteria [9]. Patients with concurrent acute illnesses including infectious diseases within the past 1 week, malignancy, and active immunological diseases; medical history of clinical cardiovascular disease; tuberculosis, pregnancy, lactation, using corticosteroids or confounding factors for proteinuria, renal insufficiency; type 1 diabetes patient, pregnant women, children; adolescents were excluded. All subjects with serum hs-CRP value greater than 10 mg/liter have also been excluded from analysis.

BMI was calculated and classified by WHO criteria

High BP was diagnosed in accordance with JNC VII

Blood samples were taken in the morning after 8 to 12 hours overnight fast. Samples were collected in sterile tubes, and sent to the hospital laboratory departments within under 1 hour.

Table 1 . The clinical and biochemical characteristics in relation to serum hs-CRP 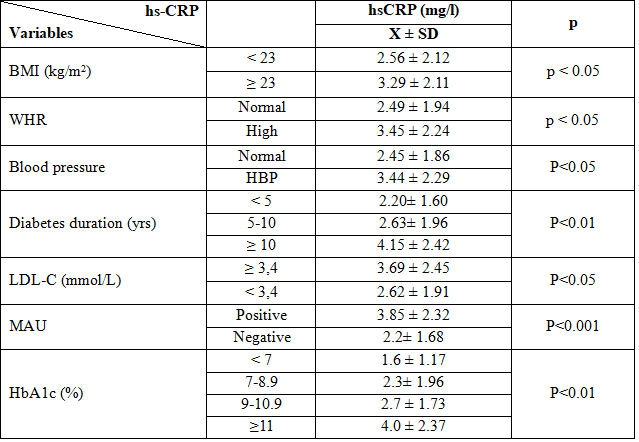 Figure 1. Correlation between hs-CRP and HbA1c in patients with diabetes mellitus. 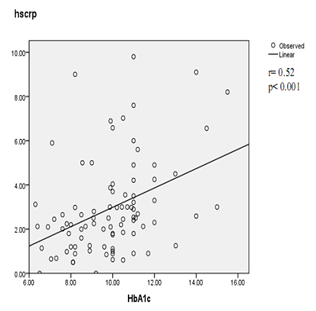 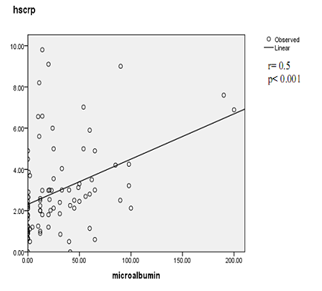 The clinical and biochemical characteristics in relation to hs-CRP of the study group were shown on the table 1. We observed that the hs-CRP level was signiﬁcantly higher in subjects with obesity or overweight, high WHR, or patient with high blood pressure. hs-CRP level was also signiﬁcantly higher in diabetic patients with high LDL-C as compared to diabetic patient with normal LDL-C (p<0.05). Several earlier studies have shown the similar results. In a study by Safiullah Amanullah, Abdulla Jarari et al. in 2010, subjects with abnormal hs-CRP had higher proportion of hypertension, obesity, hypercholesterolemia [10]. A study reported by Paul M Ridker, Julie E. Buring et al in 2003 showed that serum CRP level was significantly higher among type 2 diabetic patients who had any component of the metabolic syndrome: obesity, dyslipidemia, high blood pressure [11]. Several explanations are possible for the apparent association between CRP and BMI, dyslipidemia. First, individuals with obesity are at increased risk for various chronic diseases, such as cardiovascular diseases, insulin resistance condition which are also characterized by elevated CRP concentration [6], [12]. Interestingly, hs-CRP level in type 2 diabetic patients who had microalbuminuria was increased many times than patients without microalbuminuria. Study of Mohd. Idrees Khan el al in 2012 [13], and  Marije van der Velde et al in 2012 [14], have showed the similar results: hs-CRP level was higher among subjects with elevated albuminuria versus subjects with normoalbuminuria.

This study also showed a weak correlation between UAE and inflammatory parameter in type 2 diabetic patients at an early stage of diabetic nephropathy. Inflammatory markers in early diabetic nephropathy in patients with type 2 diabetes were elevated. In this study, we compared the serum hs-CRP level with different levels of HbA1c. For each level of HbA1c, and the elevation of hs-CRP level was as follows: <7%, 1.6 ± 1.17mg/l ; 7– 8.9%, 2.3± 1.96mg/l; 9 –10.9%, 2.7 ± 1.73mg/l; and ≥ 11%, 4.0 ± 2.37mg/l. The current study demonstrates that higher HbA1c is signiﬁcantly associated with elevation of CRP. These results imply a signiﬁcant relation between inﬂammation and glycemic control in people with type 2 diabetes.            The similar results were observed in the study of M. S. Roopakala et al in 2012 [15]; and of Dana King et al in 2003 [16]. On analysis of the correlation between hsCRP level and HbA1c, and microalbuminuria as showed in  figure 1 and figure 2, we found a positive correlation between hs-CRP level and HbA1c (r= 0.52; p< 0.001) and a positive correlation between hs-CRP level and microalbuminuria (r= 0.5; p< 0.001). The positive correlation of hs-CRP with HbA1c was also observed in the  previous study. Mohd. Idrees Khan, Kauser Usman et al reported in 2012 that glycemic control (HbA1c) and microalbuminuria were the major correlates of hs- CRP level in type 2 diabetic patients [13]. These  results suggest that the determination of serum hs-CRP levels may help in early intervention and prevention of further complications in diabetic patients.

Previous Levers of plasma homocysteine, folate and vitamin B12 IN hemodialysis patients
Next Correlation between serum Hs-CRP levers with HbAc1 and insulin resistance in type 2 diabetic patients