Although sarcopenia was related to aging process, researchers currently recognize the important role of catabolic diseases, such as chronic kidney disease (CKD), in the etiology of sarcopenia [2]. CKD increased in elderly population and some consider it as a new geriatric giant. In fact, metabolic derangements associated with CKD lead to increased protein catabolism, resulting in diminished muscle mass and function, independent of age. Therefore, it can be hypothesized that CKD patients are more prone to develop sarcopenia

Patients aged 60 years or above diagnosed with chronic kidney disease, not on dialysis, visiting the Outpatient Clinics of the National Geriatric Hospital in Hanoi, Vietnam, were recruited from Febuary 2018 to October 2018.

Exclusion criteria were: (1) blind or deaf, (2) severe dementia or delirium, (3) pace-maker implanted and (4) unable to provide consent or refused to participate in the study.

Height (m): Participants were measured against a convenient flat wall. Participants were barefoot and height was recorded to the nearest 0.1 cm. Body mass index (BMI) was calculated as weight/height2 (kg/m2) and was categorised into three groups underweight (<18.50), normal (18.50–24.99) and overweight (≥25.00).

Grip strength (kg): Handgrip strength was measured using a dynamometer (Jamar Hydraulic Hand Dynamometer 5030 J1 made in USA). The participants were instructed to sit upright on a chair without armrest, with the elbows flexed at 90°. The measurement was conducted once in the right hand, and once in the left hand. The highest value of the two measurements was used for the analysis.

Sarcopenia was defined as low muscle mass plus low grip strength, using cut-points suggested by the Foundation for the National Institutes of Health (FNIH) [3]

Chronic kidney disease was identified and classified according to the criteria of KDIGO (2002), estimated glomerular filtration rate (eGFR) was determined by equation MDRD. Quantification of blood creatinine (micromol unit / l) [4]

Chronic kidney disease was identified and classified according to the criteria of KDIGO (2002), estimated glomerular filtration rate (eGFR) was determined by equation MDRD. Quantification of blood creatinine in units of micromol / l

The International Society of Nephrology (NKF – KDOQI) classifies chronic kidney disease into 5 stages based on GFR (1, 2, 3A, 3B, 4)

Analysis of the data was performed using SPSS for Windows V.20.0 (IBM Corp., Armonk, New York, USA). Continuous variables are presented as mean (±SD), and categorical variables as frequency and percentage. Comparisons between participants with and without sarcopenia were assessed using Χ2 tests for categorical variables and Student’s t-tests for continuous variables. Two-tailed p values<0.05 were considered statistically significant.

3.1. General characteristics of the participants

A total of 180 elderly patients with chronic kidney disease were included in the study. 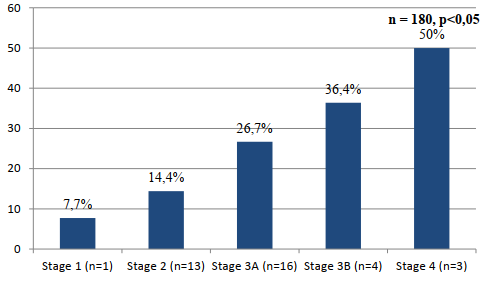 Among the study patients, 20.6% had sarcopenia according to the FNIH criteria. The rate of sarcopenia between studies is inconsistent, ranging from 5 to 16% at the age of 60 and from 7 to 34% at the age of 70 depending on the study population and sarcopenia diagnostic criteria. Sarcopenia is a rising problem in elderly patients suffering from CKD. Sarcopenic participants with CKD had significant reduction in muscle mass, strength and higher risk of falls which made them more vulnerable to loss of independency and physical inactivity as found by others [6]

Albuminuria is considered a risk factor for the progression of chronic kidney disease and cardiovascular disease [9]. An association between albuminuria and sarcopenia has been reported in many studies. A National Health and Nutrition Survey of Korea (2011), 2,158 people over 19 years old participating in the study, demonstrated that people with sarcopenia had an increased risk of albuminuria and vice versa [10]. In our study, sarcopenia and albumninuria were not associated. Our results are similar to the results of Viviane et al. (2017), which did not find an association between sarcopenia and albuminuria with a sample size of 100 patients with CKD [2]. This difference is probably due to the fact that our sample size as well as that of Viviane is not large enough to realize the relationship between sarcopenia and albuminuria.