Hue Unviversity of Medecine and Pharmacy

Diabetes mellitus is a disease that is strongly associated with cardiovascular complications, including ischemic heart disease (IHD), peripheral arterial disease, stroke, cardiomyopathy, and congestive heart failure (HF). Abundant evidence shows that there is an increased risk of cardiovascular disease mortality and morbidity in patients with type 2 diabetes mellitus, particularly IHD.

The IHD in diabetic patients is characterized by accelerated atherosclerosis occurring at an earlier age than the nondiabetic population. It is more extensive, diﬀuse inmultiple arterial territories, and involves more distal and smallercoronary arteries [10]. Perhaps the overriding risk factor for IHD in insulin resistance and T2DM is the associated dyslipidemia [13]. The autonomic nervous system, which controls a widerange of bodily functions, can be damaged in diabetes with a variety of manifestations, most commonly, cardiovascular, urogenital, gastrointestinal, thermoregulatory, and sudomotor function [9].

So the patientsare not received effective and timely medical managements, and able to have serious consequences, including adverse medical outcomes, even death. Particularly, the prevalence of unrecognized or silent MI appears to be higher in patients with diabetes mellitus compared with nondiabetics, ranging from 2% to 7% [11].

Left ventricular (LV) systolic dysfunction only established when damage or death of significant part of myocardium occurs as a result of acute myocardial infarction [1]. The more myocardium lose, the more LV systolic function is reduced [1].

Ischemic cardiomyopathy is determined when ejection fraction (EF) < 50% (is considered as reduced EF). Although ICH is recognized a double of the incidence and severer in patients with DM, it is not common have extensive infarction when evaluated by the release of creatine kinase, radionuclide ventriculography or echocardiography [1].

To improving prognosis and outcomes in diabetic patients with SIHD, an early diagnosis and appropriate management are the most important. So this study was designed with two purposes.

To determine the prevalence of HF in type 2 diabetic patients with SIHD and the risk factors of HF in those patients.

A total of 51 type 2 diabetic patients who was diagnosed SIHD based on ECG and/or echocardiography and/or coronary angiogram and without chest pain.

IHD is diagnosed when has one or more criteria, including ECG has horizontal or downsloping ST segment depression of at least 1 mm and/or echocardiography has the induction of a regional wall motion abnormality and/or coronary angiogram has significant coronary stenosis (50% or greater lumen stenosis of the left main coronary artery or 70% or greater lumen stenosis of the left anterior descending or the left circumflex or the right coronary artery).

Ischemic cardiomyopathy has been defined when patients have IHD and LV systolic dysfunction (EF<50%). Using the Framingham criteria for diagnosis of HF. Hypertension was defined as the measurement of systolic/diastolic blood pressure higher than 140/90 mmHg. T2DM was diagnosed based on ADA 2017 guideline and/or had been previously diagnosed T2DM and was using anti-hyperglycemic medications or insulin.

The correlation between variables was calculated by a Pearson correlation analysis. All statistical analyses were performed with Statistical Package for the Social Sciences 22.0 (IBM SPSS Statistics 22.0). A value of P<.05 in a 2-sided test was considered significant. 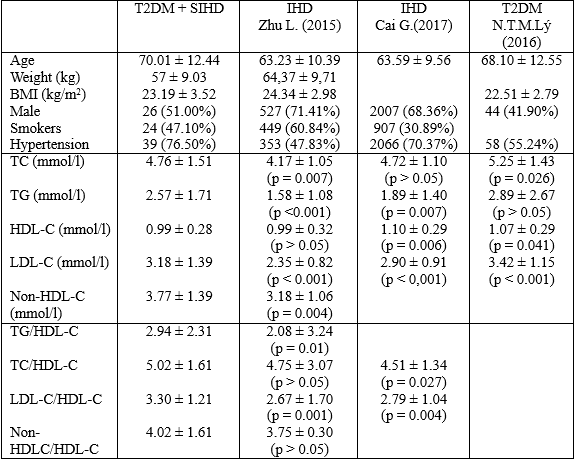 with and without heart failure

Table 5. The risk factors for LV systolic dysfunction in T2DM patients with SIHD 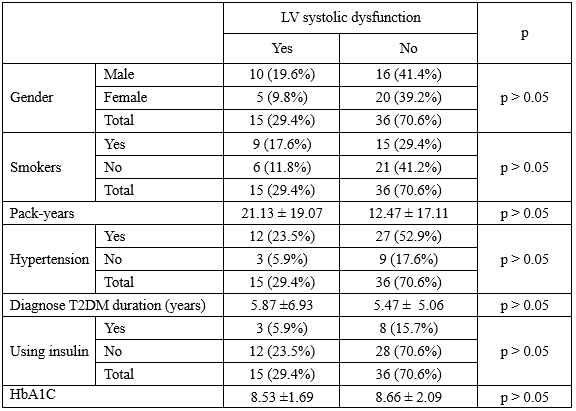 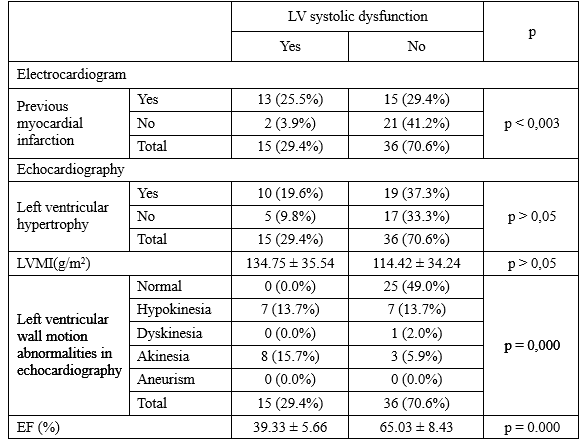 Table 7. The risk factors for previous myocardial infarction in T2DM patients with SIHD 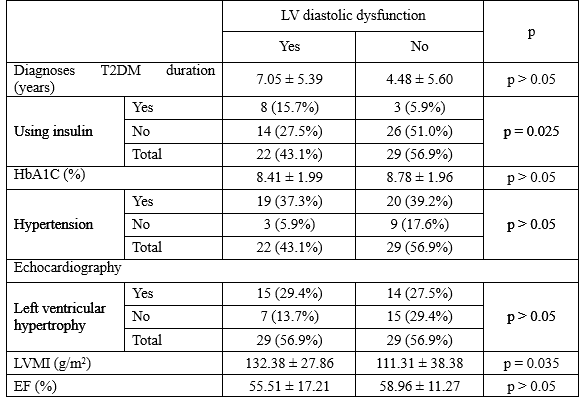 The importance of the atherogenic lipoprotein particles, including LDL, VLDL, IDL, and Lp(a) in the development of atherosclerosis, particularly IHD (IHD), and anti-atherogenic role of HDL in preventing atherosclerosis diseases have long been recognized in numerous studies. LDL cholesterol remains the primary target of therapy for the prevention of IHD. In recent studies have illustrated that the lipoprotein ratios and non-HDL-C are good predictors of vascular diseases; which have greater power than isolated lipoprotein parameters used independently, particularly LDL-C and similar power to that of the apoB/apoA-I ratio.

In a hospital – based case-control study consisting of 738 IHD patients and 157 control subjects was conducted in a Chinese Han population, Zhu L. (2015) showed that the IHD group had significantly higher of non-HDL-C, TG/HDL-C, TC/HDL-C, LDL-C/HDL-C, non-HDL-C/HDL-C than the control group (p<0.05 for all).

However, there were no significant differences in TG, TC, LDL-C, HDL-C, LDL-C, apoAI, and apoB100 between the two groups [8]. In a similar study, Cai G. (2016) indicated that the value of nontraditional lipid profiles, including non-HDL-C, TC/HDL-C, LDL-C/HDL-C, and atherogenic index of plasma, were all significant higher in the IHD group than in the control group, and might be a strong and independent predictor for IHD in the Chinese Han population [3].

In our study, there were no values of lipid parameters, lipoprotein ratios, and non-HDL-C in T2DM patients with SIHD which were lower than the IHD group in Zhu’s study (2015).

Specially, the values of TC, TG, LDL-C, non-HDL-C, TG/HDL-C, and LDL-C/HDL-C were all significantly higher in T2DM patients with SIHD than in the IHD group.

A total of 51 T2DM patients with SIHD took part in this study, there were 12 patients (23.5%) diagnosed with heart failure (HF) based on Framingham diagnostic criteria and European Society of Cardiology criteria. About classification of HF, the number of patients had HF with preserved (HFpEF), mid-range (HFmrEF), and reduced (HFrEF) ejection fraction were 2 (3.9%), 5 (9.8%), 5 (9.8%), respectively. There were 10/12 patients (83.33%) diagnosed with HF had reduced left ventricular (LV) systolic dysfunction and only had 2 patients with heart failure had isolated LV diastolic dysfunction. So the most common cause of heart failure was LV systolic dysfunction or reduced LV ejection fraction.

This is a reason why diabetic patients have higher prevalence of severe HF and have a significant higher risk of mortality and morbidity at hospital due to HF than non-diabetic patients.

However, there were no statistically significant differences between males and females; between smokers and non-smokers; between hypertension and normotension were observed in the risk factors for LV systolic dysfunction in the T2DM patients with SIHD (p > 0.05). The known T2DM duration were no differences between two groups with and without LV systolic dysfunction, 5.87 ± 6.93, and 5.47 ±  5.06 years (p > 0.05), respectively.

So it meant that our patients was no early diagnosed at the earliest stage of T2DM. Therefore, the patients were not controlled their blood glucose level to prevent cardiovascular complications.

Diabetic men in the Multiple Risk Factor Intervention Trial (MRFIT) had an absolute risk of IHD death more than three times higher than that of the nondiabetic cohort, even after adjustment for established risk factors.

Seminal work from Finland showed that patients with T2DM without a previous myocardial infarction (MI) have a risk of MI over 7 years as high as that of nondiabetic patients with a history of MI [13]. In our study, 13/15 T2DM patients (86.7%) with LV systolic dysfunction detected by a medical history and ECG had previous MI.

And there were rigorously significant relation between previous MI and LV systolic infarction with p < 0.003.

There were significant differences between two group with and without previous MI about the known T2DM duration, HbA1C, traditional lipid parameters, non-HDL-C, and lipoprotein ratios. Hypertension did not relate to previous MI in T2DM patients with SIHD. Finally, male and smoking able to be seen as the risk factors of MI in T2DM patients with SIHD.

Diabetes is associated with a fourfold increase in the risk of congestive HF, even after adjustment for other cardiovascular risk factors such as age, BP, cholesterol level, obesity, and history of  IHD [13]. Patients with diabetes, who commonly present with either HFpEF, HFmrEF, or HFrEF, experience higher rates of congestive HF than donondiabetic patients after an acute MI, regardless of thesize of the infarct zone [13]. These fndings suggest that diabetes it self causes deleterious effects on the myocardium, leading to poorer outcomes [13].