Diabetes is a chronic illness that can be described as a “silent killer.” Diabetes because of insulin deficiency, or the reduction of insulin results, or both. According to the International Diabetes Federation (IDF), there were 425 million older people living with diabetes in 2017, more than 50 percent of whom were not diagnosed and treated. Constipation is not a disorder but a symptom and is characterized by reduced frequency of defecation, increased hardness of the stool, and/or trouble passing through fecal matter. When the age of a person grows, so too does the prevalence of their constipation. Large population surveys have found that 99% of all adults have bowel movement frequencies within the range of 3 per day to 3 per week [1]. The prevalence of constipation in people with diabetes is thought to be significantly higher and related to problems with the autonomic nervous system [2]. One study of patients in an ambulatory diabetes care clinic reported that 60% suffered from constipation. Severe symptoms requiring the regular use of laxatives may occur in up to 20% of patients with diabetic neuropathy [3].

People were interviewed if they met these following criteria: (1) over 60 years old; (2) was diagnosed with diabetes; (3) accepted to take part in the study. For people who (1) under 60- year old; (2) having mental disorders; (3) unable to join in this study were excluded in this study.

A cross-sectional study was conducted in National Geriatric Hospital, Hanoi between 10th July 2020 and 10th October, 2020.

– The sample size was collected based on the entire sampling method and was calculated by using the formula:

made to facilitate defecation in at least 25% of the defecation times (e.g., finger-hooking, pelvic floor support); defecation less than 3 times / week. Responding 2 of the 6 criterias will be diagnosed as constipation.

The total number (n=203) of participants in this study that was recruited from 10th July to 10th October 2020. These are some outstanding and typical tables which are presented demographic and characteristics of variables. 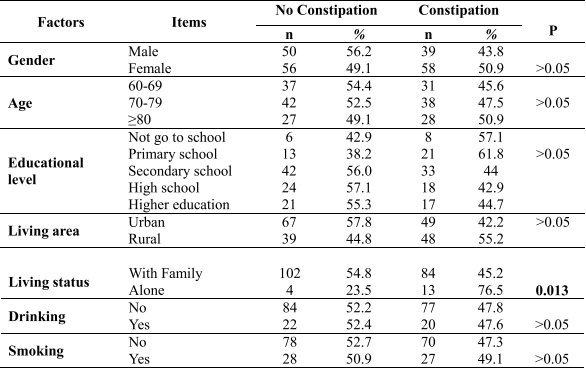 The table indicated an association between living status and constipation prevalence (p<0.05). A total of 17 people interviewed are living alone / others. Of which, only 4 people have constipation (accounting for 23.5%) and the remaining 13 people are normal (accounting for 76.5%). Most of the interviewes were living with their own families. The rates of this group of people suffering from constipation and normal were nearly equal, at 54.8% and 45.2%, respectively. Other demographic characteristics (gender, age, educational level, living area, drinking and smoking) were also considered, but no significant difference was found. A pie chart illustrates the distribution of constipation status in elderly diabetic patients based on the Rome IV questionnaire regarding functional constipation diagnostic criteria. According to the chart, we can see that the rate of constipation among the older with diabetes is very high, almost half n=97 (up to 48%).

Among the respondents, there were 116 votes for category 4: feces such as sausage, solid, smooth and soft, with 28.4%. Type 7 (completely loose stools, diarrhea) was least voted, only 3 votes, accounting for 0.7%. The number of votes gradually increased from category 1 to category 4, then gradually decreasing to category 7.

Table 3. Duaration of constipation and use laxative ( n=97)

This study conducted 203 participants with 89 male (43.8%) and 114 female (56.2%). In those older than 70 years, the prevalence was found to be comparable in both men and women (20.6 percent versus 25.0 percent , respectively). The prevalence in Japan’s research with participants over 60 years old was 36.9% of female and 63.1% of male [5]. It was difference with this study because Japan’s research to determine the bowel symptoms associated with diabetes and diabetes-related factors after excluding gastrointestinal organic diseases. Therefore, research subject of them mainly focused on male. Almost the study had the rate of female being higher than the rate of male. The reason may be explained by different research subject or sample size.

The study shows that constipation accounts for a very high rate among the older diabetic patients (up to 48%), assessed by Rome IV criteria. While several population-based studies have measured the prevalence of constipation, the findings are contradictory because various parameters have been used. The average prevalence of constipation in adults was estimated at 16 % worldwide (between 0.7 per cent and 79 per cent), while the prevalence of 33.5 % was assigned to adults aged 60 to 110 years [6]. In other research, at least 75% of older hospitalized and nursing home residnets use intestinal laxatives [7].

A recent historical cohort analysis of randomly selected subjects from Olmsted County (USA) examined 4,176 subjects and recorded 16 percent overall constipation prevalence. Another study reported that constipation would affect up to 20 % of the population of North America [8]. Similar to the 19.9% reported in middle-age residents of Olmsted County [9]. Older individuals are particularly prone to it with a reported prevalence of up to 50 % in community- dwelling elderly and up to 70 % in nursing home residents.

The reason for the difference between the rate of constipation in the world and in this study is: different study populations, study subjects, different study durations.

The study showed that prevalence of constipation in elderly diabetes patients was high. Early detection of this situation is important to manage effectively.